Disclaimer: This article may change from time to time to reflect recent/relevant advances in the field of concussion within combat sport…

“All of these animals have shock absorbers built into their bodies. The woodpecker’s tongue extends through the back of the mouth out of the nostril, encircling the entire cranium. It is the anatomical equivalent of a safety belt for its brain. Human beings? Not a single piece of our anatomy protects us from those types of collisions. A human being will get concussed at sixty G’s (G- force). A common head-to-head contact on a football field? One hundred G’s.“

From the film ‘Concussion’ in 2015 based on some real life events and people.

Now while the whole film (let alone the quote), may not be scientifically accurate (or even about concussions!), it is a profound statement allowing us to recognize a crucial matter: every organism has an amazing, unique and intricate design, and we are extremely fragile and dependent upon these designs.

The brain sits in a pool of cerebrospinal fluid without any connection to the skull. As shown in the movie clip; the example of an apple in a slightly filled jar of water gives us a parable of how the brain moves with each impact to the cranium (in this case, the jar). With each impact to the jar, it leads to the loss of integrity of the apple, eventually causing it to crack. In the case of the brain? It’s a lot more complex than that.. a neatly packed ball of jelly with specific functions, hitting onto the cranium and causing the jelly to be stretched and sheared at a microscopic level. The makings of this jelly are over a 100 billion neurons and glial cells, all involved in governing your body systems.

SO what is a ‘Concussion’?

Concussion, also known as Mild Traumatic Brain Injury (mTBI), is an injury through impact to the head (brain) which causes temporary losses in brain function.

It has been previously described as “transient, temporary, and neurological dysfunction resulting from head injury with temporary loss of brain function” (Anderson & Macleod, 2006)

a) There are no gross pathologies such as a hemorrhage

b) No identifiable damage of the neural structure through conventional neuroimaging techniques such as MRI (Noble & Hesdorffer, 2013).

This means it is quite difficult to diagnose and has many generic symptoms which can easily make it a condition which is misdiagnosed or more importantly, ignored or unnoticed.

How does it happen/What causes it?

Concussion is caused by acceleration, deceleration and rotational forces applied directly or indirectly to the head, leading to the damage of brain tissue. These forces can occur from direct or indirect impacts, hence concussions are not only the result of impact to the head, but from impact to the body resulting in head movement (e.g. car accidents involving a whiplash {coup-contrecoup})

(Note: The amount of movement in the picture above is not an accurate representation of brain movement within the cranium, but gives us an idea of the acceleration/deceleration forces on the brain during impact that leads to stretching of brain tissue) 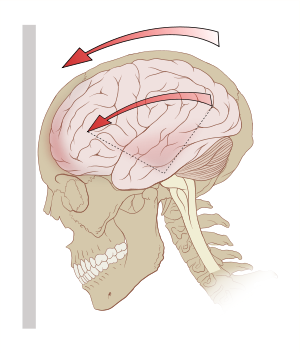 The principal causes of head trauma in combat sports include straight impact blows to the face (e.g. jabs and front kicks) leading to linear acceleration of the head or impact from an angle (e.g. roundhouse kicks, hooks and uppercuts) leading to rotational acceleration (Unterharn-scheidt, 1995). High incidences are also seen within sports such as American Football, Hockey, Rugby, Football (soccer) and Basketball (Harmon et al., 2013). These are the results of head on head collisions and collisions with the ball or ground.

The movement of the brain within the cranium can lead to shearing of cells along with stretching and disruptions at the structure of the neurons within the brain. The stronger the impact, the larger the stretch and deeper it may affect the brain. It is said that a 15% stretch of the neuron length will result in biochemical changes (such as membrane depolarization and deregulated release of neurotransmitters) resulting in an acute failure of neurons leading to a concussion (Gaetz, 2004).

Further research with the use of finite element modelling (Patton, Mckintosh & Kleiven, 2015) and various alternative methods (Jang et al., 2019) have pointed towards a deep structure within the brain, particularly being effected by head impacts. This structure/region is known as the Corpus Callosum, which is ultimately a bundle of nerve fibers that bridges/connects information between the right and left hemispheres of the brain. Due to this potential disruption in connectivity, it is suspected to be a cause of cognitive deficits at the onset or post-concussion, but has yet to be fully understood. Watch below and observe the red portion of the brain during this simulated head movement based on an American Football tackle. This is the corpus callosum being stretched by ~50% of it’s original length.

While acute changes in neural function are a scare factor within bouts, long term consequences are not always considered by athletes and coaches. 204 participants from the Professional Fighters Brain Health Study were observed for long term brain changes; repetitive head impacts correlated with larger losses in brain volume (atrophy), particularly at the  left thalamus and regions of the corpus callosum. MMA fighters portrayed a similar pattern to a slightly lesser extent. On the other hand, retired boxers showed large declines in left & right amygdala and right hippocampus. In addition, neurofilament light chain (Nfl) was examined within this study. This is a protein found within the cerebrospinal fluid and blood when damage to the neuron (specifically axons) occur (Gaetani et al., 2019). Higher levels of Nfl were found in relation to larger loss in volume of the brain, indicating higher levels of neuronal damage. Read more about this 2019 study here or below.

To help familarize yourself with some of the affected regions of the brain;

a) the amygdala plays a key role in emotion, stress, fear etc

b) the hippocampus is responsible for long and term memory

c) the thalamus is the gatekeeper of sensory information before reaching the brain and allowing you to respond.

Perhaps this may now aid you to understand where the fear of dementia (particularly Alzheimers), memory loss in general, poor reaction times and increased negative mood states has originated from. However, much is yet to be proven and it is dangerous to just affiliate all the above to being hit on the head!

Other have observed changes in neural function even after standard header practices within soccer, which may suggest that with each exposure to head impact, there is an increased risk of concussion or acute changes in brain excitability.

Through studies observing biomechanical forces to the brain, severity of impact to the brain has been observed to increase with weight class. In addition, it has been reported that the punch of a professional boxer may generate forces on impact that are equivalent to a 6kg bowling ball rolling at 20mph (Athaet et al., 1985). So though you may be entertained by head shots or knockouts, it is vital to understand the neurlogical consequences to constantly exposing themselves to this level of impact. (Safety first!)

How prevalent is it?

The Centre for Disease Control and Prevention (CDC) reports an estimate of 135,000 patients per year to arrive at emergency departments with concussions from sports or recreational activity (Laker, 2011).

Within combat sports, particularly boxing and kickboxing, concussions account for approximately a third (33%) of injuries experienced by fighters . Similarly, 28.3% of fight stoppages within MMA have been reported due to head trauma with a rate of 15-16 concussions per 100 bouts (Curran-Sills & Abedin, 2018; Hutchison et al., 2014; Buse, 2006). A study that examined injuries sustained in professional kickboxing over a 16-year period showed an injury rate of 19.2 concussions per 1000 fight participations (Zazryn et al., 2003). Elite amateur boxers over a 5-year period in the UK showed an incidence of 0.53 concussions for every 1000 hours of competing/training (Loosemore et al, 2015). Note; these studies have reported diagnosed concussions, but this does not reflect quantity and magnitude of impacts taken by each athlete.

It is most frequently observed in American football, especially linemen and linebackers, who are reported to be exposed to more than 1000 impacts per season (Crisco et al., 2010). Even the sport of soccer/football has been observed to have significant rates of concussion with reports of 1/5th of injuries within high school games to be due to concussion (Kerr et al., 2018).

What are the symptoms?

Typically, clinical symptoms straight after a concussion include:

Though loss of consciousness (e.g. Knockouts) is generally attributed to concussion, it is important to note that this is only known to occur in 10-20% of cases (Giza & Hovda, 2001), indicating it still may occur 80-90% of the time, regardless of an obvious sign.

However, even if these symptoms are eventually not apparent.. or concussion is not diagnosed..

with newer electro-physiological techniques, researchers now question has the brain actually recovered? Yes, the symptoms can cease to exist, but are there any unknown/residual effects? Can the brain structures look fine but something still be wrong?

Short answer: We’re not quite sure yet!

Less shorter answer: The risk of further concussions and musculoskeletal injuries have been reported to increase in athletes with previous concussions (Guskiewicz et al., 2003; Herman et al., 2016; Nordstrom et al., 2014), which suggests that some of these concussion-related changes to the brain have not yet truly healed. Some research also suggests that in some cases, the brain to muscle pathway still portrays signs of disrupted neural pathways even after 9 months post concussion (Lewine et al., 2007; Huang et al., 2009; Lewis et al., 2017).

Therefore the question is: How much do we still not actually know about the effects and potential causes of concussion in sports, let alone the sports which involve which involve repetitive head impact?