By now, you hopefully are familiar with the anatomy of the brain, spinal cord and the various neurons that reside within the tracts that eventually reach skeletal muscle. In this article, we will aim to discuss how all these neurons finally communicate with eachother to achieve a specific outcome i.e. muscular contraction.

Alongside muscle cells, neurons are capable of responding to stimuli through the generation of electrical impulses (excitable). These responses may be restricted to local responses (graded/generator potentials) or propagate across the axon towards the axon terminal (action potential). Neurons communicate with eachother across synapses through release of transmitter substances in a process called synaptic transmission. This can only be achieved through a complex set of electrochemical processes initiated by a change of voltage within the cell. To better understand this, let’s discuss ‘potentials‘.

The maintainenance of ion composition or ion difference (gradient) within and outside the cell is achieved in 2 manners (Figure 1):

Active forces – ion pumps within the membrane requiring energy consumption (ATP). In the case of muscle and nerve cells, sodium (Na+) and potassium (K+) are regulated by Na, K ATPase. This specialized protein is responsible for the extrusion of Na+ from inside the cell while importing K+ from the extracellular space.

Passive forces – Chemical forces (diffusion) across ion channels aiming to bring Na+ into the cell while exporting K+, to balance out the intra and extracellular compartments AND electrical forces (membrane potential) trying to bring Na+ and K+ inwards . The combination of these two passive forces working at equal strength results in an equilibrium potential for each ion (Figure 2).

Membrane potentials are a result of the size and number of stimuli the cell recieves. 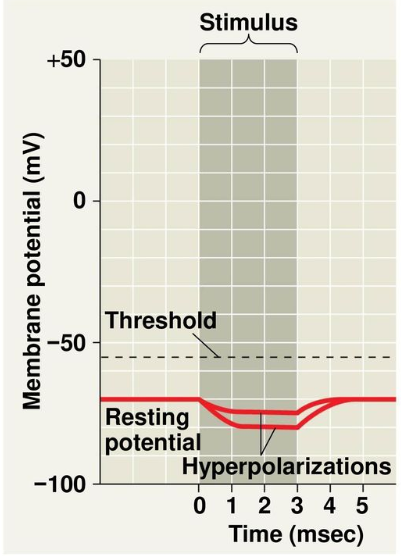 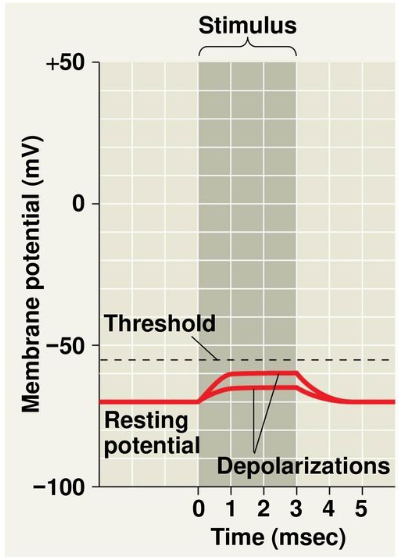 This is an all or nothing depolarization response (of approximately +100mV) and is a result of specialized voltage gated ion channels within the nerve cell membrane. Let’s go through the process of an action potential in 6 different stages (Figure 5) and 2 different perspectives (electrical and chemical):

Electrical – Incremental rise in voltage from -70mV to approximately -55mV.

Electrical – All or nothing response once depolarization reaches threshold. This rapidly jumps up to approximately +35mV, thereby bringing cell closer to Na+ equilibrium potential. Now the cell is positively charged.

Electrical – Steep decline in cell voltage towards a negative state (return to a depolarized state). In this period of time, no new action potential can be recieved (absolute refractory period).

Electrical – Gradual decrease in voltage from -70mV to approximately -80mV, driving it closer to K+ equilibrium potential. During this period, another action potential may occur but the stimuli must be larger in order to reach threshold voltage (relative refractory period).

Chemical – Voltage gated K+ channels are much slower in closing allowing K+ to continue leaving the cell until the low voltage leads to closure of K+ channels (Figure 10).

The effects of myelination

As mentioned previously, axons are either myelinated or nonmyelinated. Nonmyelinated axons generally have smaller diameters and upon entry of an action potential, voltage gated ion channels will open in uniform fashion i.e. the action potential will depolarize a certain region of the axon and then continue depolarizing along the length of the axon (Figure 11b).

This is not the same in myelinated axons as myelin provide a large electrical resistance and low capacitance (stored charge), therefore cannot facililate the flow of an action potential along the axon length. However, myelin sheaths are interrupted by gaps known as the Nodes of Ranvier (Figure 11a), within which a high density of voltage gated Na+ channels sit upon the membrane and are exposed to the extracellular space. Meanwhile K+ channels sit within the internodal and paranodal sections (Figure 12) of the membrane, masked by the myelin and therefore much slower in action. As a result of negligible current flow through the myelin, action potentials tend to ‘jump’ from one node to the other to propagate along the axon. This is termed ‘saltatory conduction’ and has two primary consequences:

Synapses within the mammalian brain and spinal cord are mostly chemical synapses. These are distinct from electrical synapses due to a cleft (~30nm wide) separating the pre and post synaptic membranes whereby extracellular space is extended within. It is within this synaptic cleft, that the action potential leads to the release and diffusion of specfic neurotransmitter molecules, and attach onto receptors found at the post synaptic membrane. These receptors are responsible for the opening (or closing) of ligand-gated ion channels which will determine whether a post synaptic potential will be excitatory (depolarization) or inhibitory (hyperpolarization).

Neurotransmitters are found within the presynaptic terminals within membrane bound ‘bubbles’ known as synaptic vesicles. The propagated action potential across the axolemma leads to the activation of presynaptic Ca2+ channels and the influx of calcium ions. Proteins responsible for the non-movement of synaptic vesicles (synapsins) are phosphorylated by Ca2+ ions, thus allowing for vesicles to reach the presynaptic membrane and diffuse across via exoctyosis (Figure 13).

a) bind to a post synaptic receptor which is directly linked to the opening/closing of ligand-gated ion channels and rapidly removed thereafter. This is the ‘fast’ method (few ms) and is exclusive to neural communication within the nervous systems. (Depending on the type of ion channel it will open or close, will determine whether tranmission will be excitatory or inhibitory). OR

b) bind to receptors that activate G-proteins and production of secondary messengers. This process involves a cascade of molecular events and may take up to seconds, therefore termed ‘slow’ transmission. However, in contrast to fast transmission, which is highly targeted upon a single post synaptic neuron/cell, slow tranmissions tend to last longer and may activate multiple post synaptic neurons. This serves as an important modulatory function such as within the endocrine system.

Now that we have hopefully simplified and standardized the overall process of neural communication, the last thing that remains unspoken about is what dictates the excitation or inhibition of a post synaptic cell?

The answer to that is based on which neurotransmitters are being released and it’s role on the ion channels. EPSPs are produced as a result of the opening of Na+ and Ca2+ channels or the closing of K+ channels, thus producing depolarization. These synapses tend to be axodendritic. On the other hand, IPSPs are a result of increased permeability of K+ or Cl-, thus producing hyperpolarization. This is also known as post synaptic inhibition and tends to be the axosomatic synapses. Pre synaptic inhibition is generally a result of axoaxonic synapes, whereby K+ or Cl- channels are activated (reducing the action potential) or reduced opening of Ca2+ channels in the pre synaptic terminal. This ultimately leads to smaller neurotransmitter release.

Interesting fact: Integration of multiple synaptic inputs lead to the overall response of the post synaptic cell e.g. if excitatory and inhibitory potentials occur too close to eachother, this will cancel out each resultant change in polarity, leading to minimal change to the resting membrane potential (spatial summation) (Figure 14).

These are present within the pre synaptic terminals and are released in accordance to nerve stimulation. More than one can be present within a nerve cell and it is not always yet fully understood what contributes to specific release. Table 1 breaks down a few commonly found neurotransmitters.

Some neurons within the CNS also contain peptides which may act similar to neurotransmitters or appear as hormones. These include but are not limited to corticotropin releasing factor, prolactin, vasopressin, oxytocin, angiotensin and beta endorphin. Other neurotransmitters formed from the amino acid tyrosine are classified as catecholamines and include adrenaline, noradrenaline and dopamine.

That concludes my summary of neurotransmission and membrane potentials for today! Stay tuned for the following articles/topics within the NM System series:

Once again, if you found this useful in anyway, please feel free to drop a comment, give the article and share to all your friends and family. Feel free to connect with me also via Twitter  @Nasiruddin4595 or Instagram @Physcombat